Deirdre Cowman has completed her PhD in the School of Psychology UCD on the topic of disordered eating prevention in primary school children. Deirdre and her colleague Dee Ryan self-published a children's book to promote positive body image and they are currently working with Bodywhys to produce teacher's resources to accompany the book (see www.magnificentlyu.com for details). Since 2010 Deirdre has been working with Susie Orbach and her inspiring colleagues in London on the Endangered Bodies campaign (formerly known as Endangered Species). In 2012, Deirdre established an Endangered Bodies Ireland group with the aim of tackling the culture of body hatred in Ireland.

Tara Fannon is a researcher and writer with interests in gender, disability, the body, and media. She received her Masters degree in Sociology of Health and Illness from UCD, Ireland. Her research explored how media representations of the feminine ideal affect body and self image of visually impaired women. She's currently pursuing her PhD in similar areas. Her other (diverse) interests include the social and cultural significance of food and the history and myth of the American Dream and its relationship to contemporary American life. Tara lives in Brooklyn, NY where she also contributes for Endangered Bodies NYC, About Face, and Metro Eireann. She's not super savvy when it comes to social media, but she does have a Tumblr if you're interested.

Emma Fitzgerald is a choreographer, writer and yoga teacher. In 2007 in collaboration with artist Áine Stapleton she founded the dance theatre company Fitzgerald and Stapleton. Alongside her work as a choreographer and performer Fitzgerald is developing a series of writings drawn from her experience as a performer and choreographer. Her current work in this field is directed at how the language matrix in which we move can enrich the experience of the body in which language comes alive. Fitzgerald trained at London Contemporary Dance School and graduated with a BA Honours in Contemporary Dance.

Shauna Kelly is a community and youth work student at NUI Maynooth. She is a feminism, reproductive rights and mental health activist. Shauna joined the Endangered Bodies Ireland team to help spread the body positivity message and to question the representation of our bodies in the media.

Anna Kerslake is a Dublin based photographer who specialises in music, fashion and feminism. Her interest in how women are represented in the media led her to begin working with Endangered Bodies Ireland. Her photographs appeared in an Irish documentary on the issue of abortion in Ireland, entitled, ‘X is for Anonymous’. ‘BeUtiful’ magazine has written an article about her feminist art work. She is currently pursuing a degree in photography with IADT and hopes to continue to bring feminist art to the people. You can find out more about Anna’s work at: www.annakerslake.blogspot.ie

Sarah Marshall is in her final year of an Applied Theology degree and will begin her M.A. in September. A main focus of her study is the theology of the body and a critique of popular, contemporary culture in regards to our disordered relationship with our body, food and self. Sarah is very passionate to see social progress through the education of the wider community and hopes that we as society might proactively develop a positive relationship and a continued conversation with the media. 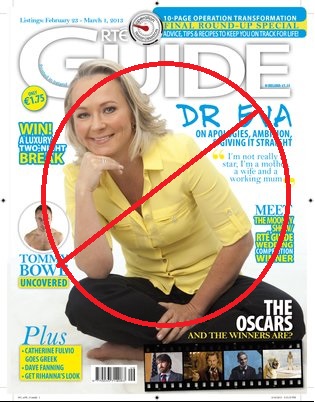